„It's amazing how quickly the body finds balance again once you stop interfering with its regular work. I find the Grinberg Method is simple and effective.“ - Martina

„The Grinberg Method taught me how to accept pain, to treat it as a friend and not as an enemy. Pain warns you about problems in your organism; it teaches you to take care of your body, so it’s a messenger you should listen to. Alex helped me to listen to my pain, explore it instead of fighting it or numbing it. He is a great guide through the mysteries of the body.“ - Ewa

„Coming back to myself, coming home, arriving - again. That feels good.“ - Marc

„The feeling you get when you notice how the energy begins to flow in your body in indescribable. I have never felt anything like it in such intensity.

It was the first time in a long time that I could feel my body again and it helped me understand what it needed. You need to experience it yourself to understand what can happen in a session and in your body.“ - Julia

„For me, the Grinberg Method is important and rewarding, because it lets me feel very clearly what matters. I have a tendency to over-analyse and to confuse my intuition with lists of pros and cons. Working with Alex has helped me tremendously to ground myself, to be more aware of my needs and to be able to take clear decisions.“ - Johanna

„The Grinberg Method has helped me to be more aware of and understand my body better so I can be more caring with myself. A good new attitude towards life.“ - Ruth

„With empathy and skill, Alex has shown me precisely that my chronic blocks were caused by my mind.“ - Edith

BE WELL - through your body!
The Grinberg Method is a bodywork technique where you are guided by a practitioner to learn how you can self-regulate limiting physical states. These limitations could be tensions, pains or breathing and digestive problems, or stressful situations as well as other negative situations or behavior patterns.
The Grinberg Method does not only support the regeneration of the body, it is also teaching about how to change behaviour patterns through bodywork. It makes you more balanced, healthier and creates space for more vigor and clarity.
To resolve blockages, the Grinberg Method uses foot analysis, footwork and various forms of touch, as well as breathing, relaxation and concentration exercises. 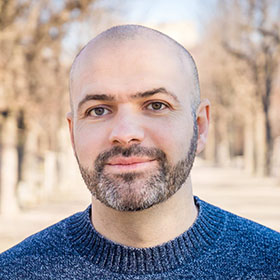 Practitioner of the Grinberg Method

Several friends had recommended the Grinberg Method to me while I was going through a touch period in my life. Having explored different approaches such as shiatsu, meditation and counselling, I thought that I already knew myself pretty well.
Boy, was I surprised when I had my first Grinberg session! I discovered a totally new way of reconnecting with myself and my body. I recognised how much effort I was making to not having to feel how much energy I actually had available. This work has brought more simplicity and clarity into my life. After just six session, I decided to learn this effective method.
VIDEOS:
Here are some links to videos that give an impression how Grinberg Method practitioners work.

A colleague in Berlin describes very accurately what the Grinberg Method is all about.

A short excerpt of the TV show "Thema" that was broadcast on Austrian public broadcaster ORF in 2015.

ABOUT AVI GRINBERG
Erfinder der Grinberg Methode:
Avi Grinberg started to engage in various forms of healing methods in the 1970s: He studied, among other things, yoga, acupressure, reflexology, Gestalt therapy, bioenergetics, and different forms of massage techniques.
In the mid-1980s, he developed his own teaching: the Grinberg Method.
A central aspect of the Grinberg Method is the connection between the physical state and learned behaviours that become more and more automatic in the course of a lifetime and that manifest in our bodies.
In the Grinberg Method, limiting physical patterns - e.g. physical pain, but also negative mental states - are identified and addressed through movement, breathing and physical exercises so that a balanced state can be re-established.
The Grinberg Method does not consider body and mind as separate and does not require a specific life style or religious affiliation. The client actively participates in the learning process.
The Grinberg Method is a complementary approach to conventional medicine and can be complementary to other forms of treatment. It is suitable for people who consciously want to improve their quality of life; it is not suitable for people suffering from serious depression. In case of serious illnesses it can be used as a supporting measure, but it is in no way a panacea.

Here you can see Avi Grinberg, the founder of the method, at work: